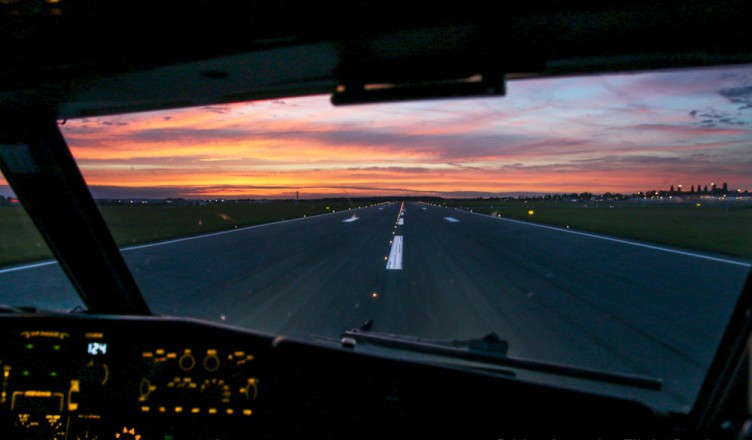 How do you handle an engine failure during takeoff in a 737 – or any other large multi-engine jet? The answer usually comes down to a V-speed we don’t use in light aircraft –V1. V1 is often called the “takeoff decision speed”, or the “critical-engine failure recognition speed.” They’re ambiguous terms – but you can distill them down to one simple thought.If you lose an engine after V1, you’ll continue the takeoff.

Confused yet? You’re not alone. Simply put, V1 is the fastest speed where you can still stop the airplane in your calculated accelerate-stop distance after an engine failure. And, since V1 usually uses a “balanced field,” it’s the slowest speed where you can continue the takeoff after a failure of the critical engine and still make your computed takeoff distance.

What Is “Accelerate-Stop Distance” – And What Is A “Balanced Field?”

When Does The Engine Fail?

Imagine you’re flying a 737 and you lose your engine at 30 knots during the takeoff roll. You may still have enough thrust out of your remaining engine to keep accelerating and take off, but you’ll chew up a lot of runway. On the other hand, you won’t need much distance to stop the aircraft. Stopping sounds like the safest idea in this case.

Now imagine you’re two knots below rotation speed in the 737 and you lose an engine. You can easily continue the takeoff and climb out without using much additional takeoff distance. However, stopping a 150,000 pound 737 rolling at 130 knots will eat up lots of runway. Continuing the takeoff clearly seems like a better choice here.

V1 usually “balances the field.” V1 identifies an engine failure speed where the distance to abort and the distance to continue the takeoff are the same. That’s called a “balanced field.” Accelerate-go distance includes the total distance to accelerate from a standing start, lose the critical engine just before V1, recognize the failure as you reach V1, and continue the takeoff to cross 35 feet at your takeoff safety speed (V2). Accelerate-stop distance includes the total distance to accelerate from a standing start, lose the critical engine just before V1, recognize the engine failure as you hit V1, and stop the airplane using idle thrust, brakes and spoilers. So, on a dry runway, you’ll actually be able to stop the airplane in a shorter distance than computed if you have reverse thrust.

How Do You Calculate The Balanced Field Length?

There’s an app for that. Actually, it’s a table. Or the FMS may do it. Either way, someone’s already figured out all of the stop and go distances for engine failures at every speed, flap setting, weight, and density altitude. They’ve figured out where the distances balance, and plotted the associated V1 speeds. Lucky you! All you need to do is look up the speed.

The Practical Part – How You Use It During Takeoff

The flying is the fun part, and you’ll hear “V1” called out during the takeoff roll. In fact, many airlines call out “V1” just before they’re actually at V1. The “accelerate-stop” calculations assume you’re applying brakes at V1, so crews call it about 5 knots early so you have time to hear it. Ideally, the “one” in V1 is said right as the airspeed reaches V1. Picky, huh?!?

If an engine fails before you hear V1, or right as you hear V1, you’ll abort the takeoff and will be able to stop the aircraft on the remaining runway.

If an engine fails after you’ve heard the V1 callout, you’ll continue the takeoff and will be able to reach 35 feet AGL in your computed takeoff distance. In fact, most airline procedures have the pilot flying remove their hand from the throttles after they hear “V1” – that way they don’t accidentally try to abort.

READ  The 10 Most Beautiful Airliners of All Time

Lots Of Calculations For A Split Second Decision

It’s amazing how many calculations go into a multi-engine jet’s takeoff planning. From the first second of ground roll, the crew have a plan for any failure. And often, the decision to abort or continue comes down to one simple speed – V1