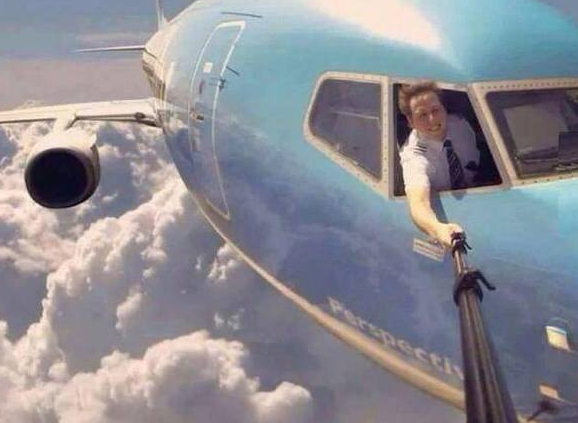 For avgeeks it’s simple to understand but many people asked me about this and other pics so let me explain to non avgeeks out there!

Let me show you the source.

This is the Real Picture

He cropped that selfie & airplane and pasted it on picture of clouds. (Yes he added effects on airplane fuselage which makes it looks like the plane is really on air)

From where he got clouds?
Hmmmm,

As simple as that!
Thanks to photoshop

Let me show you one more fake selfie.

Check it out! If you can see terminal on that fuselage

As commented, to see what it would have been like if the plane really was flying at altitude like in the photo, refer to British Airways Flight 5390 where the cockpit window blew out and sucked the pilot out of the cockpit, but through skill, fate and luck, someone was able to hold on to the captain’s legs while the copilot performed an emergency landing.