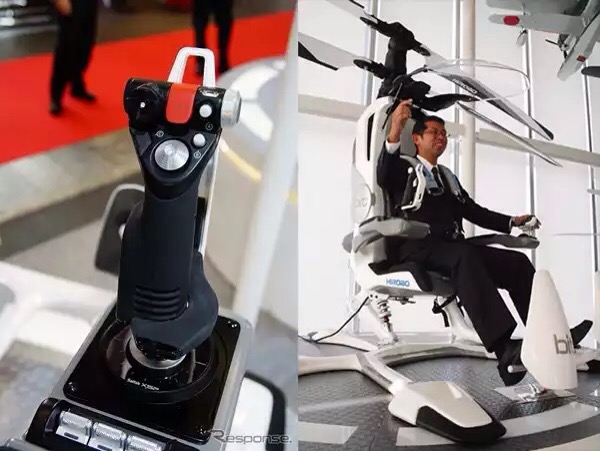 The company Hirobo is specialized in electric unmanned helicopters, they decided to use their expertise to present, the first one-person electric helicopter, the Hirobo BIT.

Unveiled on 2012 at a local Airshow, but looking for a papularity . the Hirobo BIT has two counter-rotating rotors and simplified controls with a joystick, so it can be used as a recreational vehicle.maximum speed is announced at 60mph (97kph) for 30 minutes of range, This is all assuming you’ve got $375,000 to buy one. You’ve got $375,000 right?

Okay, let’s say there’s no way you can afford it. You might still be in luck: Hirobo’s also developing a flat, remote-controlled version for search-and-rescue medical evacuations. Interestingly, the Bit prototype looks for all the world to be controlled by an embedded Saitek X52 Pro Controller. BIT was shown for the first time at the Japan Aerospace show, but was not expected to be ready for market until 2020. It seems that time scale has been shortened considerably – we were told the BIT would be ready for market in 2016, and a lack of regulations by the United States Federal Aviation Authority would be the inhibiting factor as to the BIT’s availability at market.