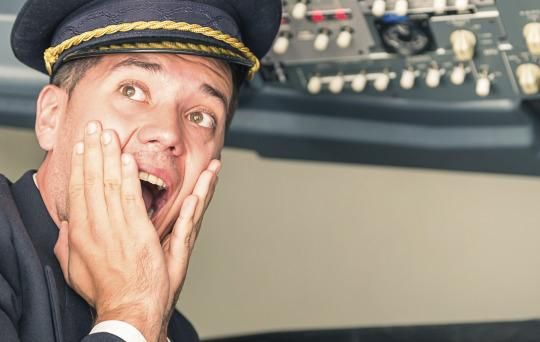 I’m an airline pilot flying domestically under the banner of a major airline.  Most people are unaware of how much of their flying is done by a “regional” airline.  Regional airlines today fly a huge percentage of the actual seat miles flown for their Major airline partner (Delta, United, US Air, etc.).  However we are paid a fraction of what the major airline pilots are paid, and even these major airline pilots are paid significantly less than their counterparts several years ago.
Many regional airline first officers make the same as your friendly pizza delivery driver.  (It is typical for most of them to make no more than 16K/year the first year.)

Here are a few things we won’t tell you:

-Dont drink the coffee.  The potable water the aircraft is serviced with is absolutely disgusting.  Chemicals are inserted into the water tanks to prevent bad things from growing, but the bad taste of the coffee isn’t the coffee–its the chemicals…

We don’t know where we are most of the time…  (kidding for the most part)  In all actuality there are much more sophisticated avionics units on most small general aviation aircraft.  Those units display many aspects of geographic awareness where most of ours simply display the route that we programmed in the flight management computer before departure.  We can tell you how far away we are from the next navigation facility and where we are in general terms, but aside from that and what we can see out the window, we typically only have a general idea of where we are when at cruise altitude.  Of course we all carry maps, but not too many of us will open the map and follow our progress on a 3 hour flight.  (That all changes as we begin descending toward the airport.  Situational Awareness is extremely important then.)

-We forget about the fasten seatbelt sign all the time.  When you look up at the sign (and disregard it typically) and it has been illuminated for the last 45 minutes in smooth air, we simply forgot.  Lots of guys will leave it on all the time.  However, sometimes we do have reports of choppy air ahead and will leave it on until we either experience it or take a wild guess that the air ahead will be smooth.

Some of us carry guns.  This is certainly public knowledge, but Federal Flight Deck Officers can carry a firearm in the cockpit.  Lots of protocol exists to ensure that the training, concealment, and utilization is standardized.